Gone With the Wend 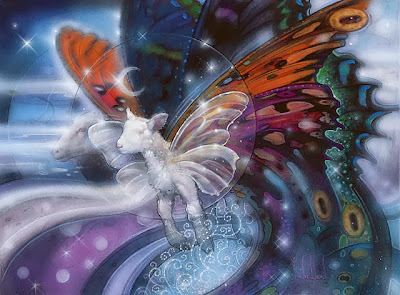 A few weeks ago my grandma died. It was coming. In fact, with Parkinson’s, she’s basically been dying for the last ten years - slowly but surely. A few weeks ago, while my grandma still stalked the edge of life, I stood at the foot of her bed and thought of every spell that might end it peacefully, and sooner rather than later.

You see, my mom’s been caring for my grandma full time for about seven years. It’s kinda selfish, but I wanted my mom to have the freedom to be able to drive to the beach on a given morning before she, too, is old and decrepit. To be able to wake up, have nothing to do, and be able to go to International House of Pancakes and order pork chops. To be able to sleep through the night without startling awake every two hours to check on vegetable granny. My mother, I feared, would begin dying too, before she ever got a chance to live her own life. 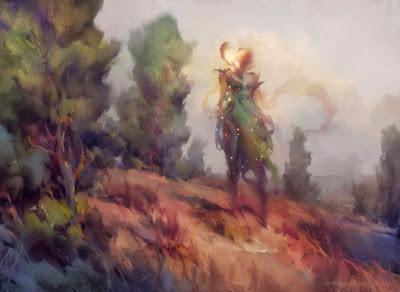 So, there I was staring at my cadaverous grandmother from across the length of her bed, wracking my mind for the proper way to take her out. Respectfully. I thought, and made little Magical prayers: Deathmark, my go-to sorcery. Doom Blade. Multiple Bolts (noisy, luckily my dad was loudly playing an acoustic Stairway to Heaven in the other room where mom was). Sip of Hemlock. Path. I started to think grandma was hexproof, because nothing worked, and day after day she breathed through her mouth stubbornly without any other sign of life.

Finally one day I walked in and knew something had to give. Pretty sure mom was drinking half a bottle of scotch a day at that point as the stress of a prolonged goodbye took its toll. I stared at my grandmother’s face, and thought of her soul, restless in a comatose body. She'd crammed multiple lives' worth of action into one span on earth. Everyone says I’m like my grandmother - spirited, passionate about good and bad decisions alike, the aforementioned selfish, willful, adventurous, easy to laugh, quick to anger, not to be bound by society’s rules. 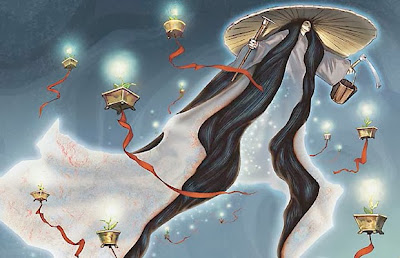 I kissed her white forehead, and thought: Baba-chan, could you leave for Mom, please?

Orzhov, Dimir, and Grixis though I am, I had to surpress a shudder because she looked so dead. The skin of her face was like the wrapper on a rice candy. Her hair had finally turned Oni-white. I had to fight down the thought that as soon as my lips touched her she would jolt upright like that thing in What Lies Beneath or a freak from Silent Hill. Hard to believe a vibrant and notoriously beautiful woman could become so still and stretched with illness.

The next day my mom called. “Your grandma stopped taking liquids.”

I couldn’t believe it. Good ole Hackworth (my husband) said he knew exactly which spell I must have accidentally cast: 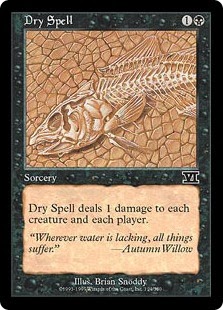 I think he was right, because in the end I didn't need a one-sided spell but something that hit all of us. Just a couple days later, my grandmother was gone.

I hope, if Mom ever reads this, she isn't angry with me. And that she drives to the goddamn beach to soak up a sunrise. And as for my grandmother, I hope... well, she and I need no explanatory words between us. She was the kind of person you usually only get to read about in novels... lucky for me, I got to be her granddaughter for awhile.