Retribution in Ravnica 1: All My Life 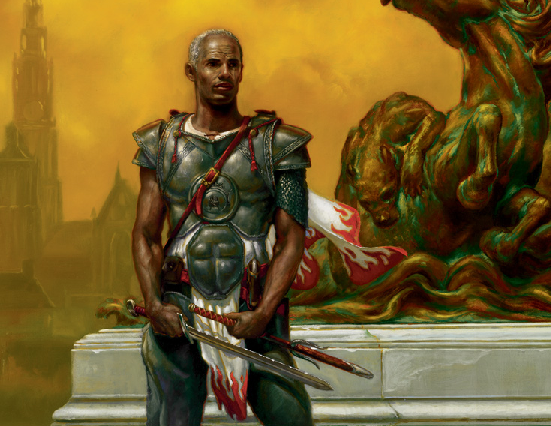 “Someone there?” He’d definitely heard or felt something. Some kind of presence or sound had disturbed his dreams of angels. Well, only one angel, really...

The ghost of Agrus Kos, ex-Wojek of the Boros Legion and now Chief of Investigations, Agyrem Division, twisted to his feet and snatched a spectral bam-stick from his bedside table. His eyes focused quickly. He spotted the intruder immediately, crouched near the door. Kos swore.

His enemy started to move again, approaching with intrepid, deadly calm. Kos grew anxious, though he tried to reassure himself. I’m dead. I’m not vulnerable to this anymore. I don’t actually inhale. Despite the pep talk, Kos had to reflexly reach up and scratch the tip of his nose.

“Back off,” he said to the intruder, brandishing the bam stick. The assailant padded forward through the shadows of Kos’s bedroom. Glowing eyes that might have once been green fixed upon the old Wojek with eagerness.

“Go away. I got nothing, kitty. Just bad memories and bad jokes. Wojeks don’t have any use for nice kitties…”

Agrus Kos fell back as a blur of ghostly white-and-blue zinged upward to float directly atop his face. He opened his mouth to protest but choked on a tonguefull of silky geist-fur.

“I… I… mmm ‘llergic to…” A paw silenced the Wojek’s protestations.

The sneezing lasted for hours. Kos told himself over and over it wasn’t physically possible to be affected by his old allergy, but it didn’t help. He tossed and turned and blew spectral snot helplessly in his bed until dawn. 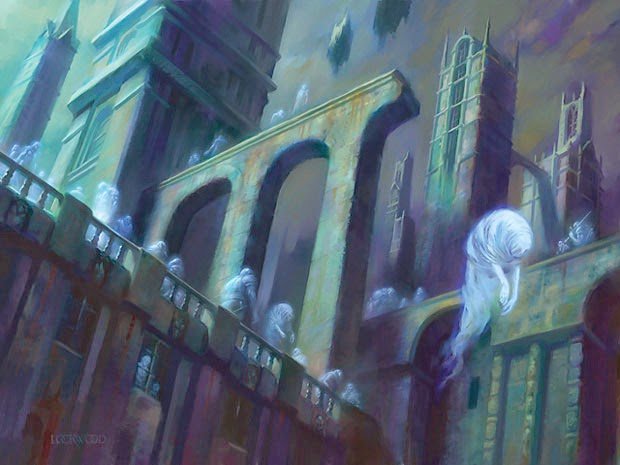 The streets of Agyrem were the streets of Ravnica freed from gravity and sucked dry of smells, and all sound took on a muted, hollow quality. What would have been laughter in real time reverberated in Kos’s ears as husks of corn rolling across gravel. When he saw ghostly street vendors hawking kabobs, he saw the steam and hungered for roasted meat, but the only scent to reach his nostrils was a faint echo of lavender and camphor. Nothing meaty at all.

Kos sat dejectedly in a hard chair in a tiny storage room in the back of one of his favorite Agyrem bars, The Storm Crow. He’d barely slept, thanks to that damn cat, and he had a long day ahead of him.

You’d think ghosts wouldn’t need sleep, Kos grumbled to himself. Over the years he’d found the nuances of spectral life had many twists and turns to navigate. Strangely enough, the idea of sleep was still necessary to function at an optimal level.

A side door to the storage room opened and Kos straightened up in his chair. He picked up the pen on the table and motioned the newcomer to sit down in the seat across from him.

The man did as directed. Kos pretended to shuffle his paperwork, assessing the man without directly looking at him. He was a geist of average height, with what probably had been dark brown hair, blue eyes, and fair skin. Pretty handsome, Kos would have said, if he went for guys. The man wore a faded, worn cloak that had once been very expensive—the patterns and fabric being the height of style some years back down on Ravnica. At odds with the man’s ornate cloak was the obviously well-used and extremely practical blade that hung at his belt. Kos recognized the model as a brutally efficient and durable sword that had been rising in popularity with assassins just before he’d died.

The man sat with a quiet calmness, but his eyes were sharp. He was obviously practiced at keeping his face neutral, but Kos noted the subtle wrinkle—a frown line—on the right side of the man’s mouth, unique within a face that wasn’t anywhere near middle-aged. Kos also noted how his guest sat with his weight away from the table, ready for anything. Mistrustful. Experienced with betrayal. Some kind of chip on the shoulder.

Kos lifted his head and smiled at the man. “Thanks for coming. Your application was pretty impressive.” A nod was the only response Kos got. The blue eyes didn’t even blink. Some Wojeks believed in always pretending all recruits were shit, but Kos had never put much stock in bluffing disinterest. He believed you could learn much more about folks by being honest.

“Seems like someone with your background could make a good living killing people freelance. Why go for the badge? We pay like crap.” Kos leaned back and folded his arms across his chest, putting on his best grandfatherly face of curiosity. He was genuinely curious, after all. And definitely old enough to be a grammy.

The man moved his hands, lacing them together on his lap. “I have a family to support.”

“Well that’s a check in the plus column, but still not your real motivation. Come on, son.”

The man shook his head. “They told me you were good. And to be honest, I was never great with deception, even during my Consortium time. I’m more a… a man of action, I guess. Things make sense when I’m fighting. I don’t have to think about it. Everything comes naturally. A blow, a follow-through… a feint to gain advantage. Even when I killed… and the situation was questionable or contentious, even then… if I won, if it was their blood out there and not mine, it felt right. Nothing else in my life has ever worked out that way.”

Kos nodded. There’s more his gut told him. This kid is a talent, but do you want him on your team?

“Not sure if you’re worth your baggage, kid,” Kos said. The man across from him glanced up, and now the blue eyes flashed with passion. “My gut tells me you’re going to put your own agenda ahead of the Legion’s.” Kos turned his palms up and shrugged back at his guest. The man smiled a rueful, deeply sad smile.

“I got here because I put their agenda ahead of mine,” he said softly. “Have you ever had people you thought were your friends—” 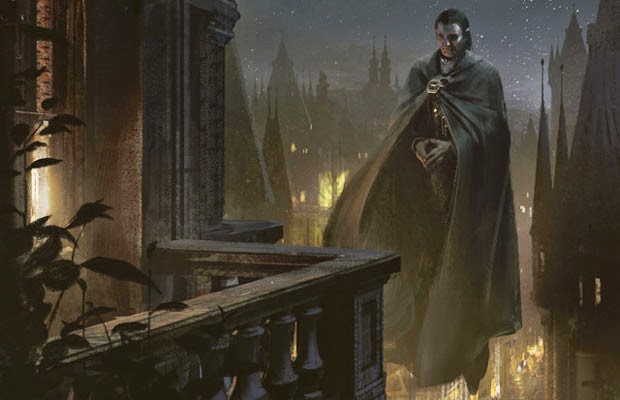 The balustrade was covered in blood, and from the parapet hung the bodies of several Boros agents--two “fleshies” and three spectral. The ongoing turf war with Szadek had produced many, many casualties recently. Kos stifled his anger and moved towards the corpses, taking out his journal to note the identities. He was pleased when he noticed that Rhoka was already working to retrieve the bodies, laying each gently on the balcony with the ease of someone who has been around scores of dead. His new partner apparently wasn’t afraid to get his hands dirty.

Szadek had been obliterated decades ago, but his malignant spirit was strong enough to reform itself time after time. Ravnica, Kos had learned from the Izzet, was a scientific anomaly in that the plane was encased in some kind of metaphysical bubble that disallowed soul energy to disperse into the aether. This meant ghosts never left the plane. Szadek had used this to his advantage, the vampire mind-mage basically leveraging Ravnican physics into immortality for himself. Szadek had murdered guildmasters, engineered guild wars, completely decimated the angelic host of decades past, and continued to be a parasite and plague upon the plane. Agrus Kos couldn’t think of a thing he wouldn’t sacrifice, personally, to eradicate Szadek forever.

“Got the names?” Rhoka was saying, before covering the dead in Simic biobags. Kos nodded. Rhoka knelt. “Any friends of yours?” he asked.

Part of being a Wojek was being resigned to let go. Lives would end, ties would be severed... inevitably, an officer would lose many who were precious to him or her. That was just the way it was. Job hazard, Kos thought, and tucked his notebook into his belt.

“We find these assholes,” Kos said. Rhoka nodded and jerked his head toward a distant spire.

“I think I know where they are,” he said. Kos raised his eyebrows, surprised. Pointing to a scar on one of the victims’ feet, Kallist explained, “I saw similar toothmarks on some vagrants dead outside that belltower a few weeks ago.”

Kos beamed at his new partner. “Well, what we waiting for, kid?”

The two Wojek specters flew from the balcony just as the sun rose above Ravnica, casting Agyrem in shades of canary and peony.
____________ 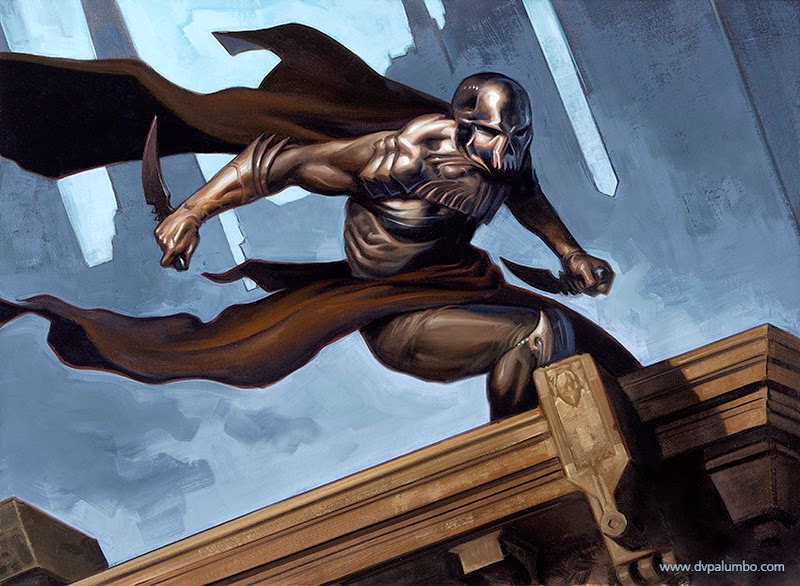 “One sec,” Kallist Rhoka said. He reached up and unclasped his heavy cloak, pulling it from his shoulders and hanging it carefully on the gargoyle outside the ingress to the belltower. Kos said nothing. His new partner had proven himself so far to be hardworking and observant, so Kos could deal with his sartorial oddities. The old soldier knew there had to be some story behind that flamboyant blue cloak, and one day he was sure recruit Rhoka would tell him what it was.

The Wojeks assailed the belltower.

As soon as Kos’s foot crossed the threshold into shadow within the spire, all hell broke loose. A shrieking gargoyle—this one much more animate than the one Rhoka had used as a coat hook—dove from the rafters and knocked Kos across the floor. Kos covered his ears and kicked reflexly, catching the gargoyle on the chin.

From the corner of his eye he saw blurs of darkness elsewhere in the room, moving with intention. Vampires. Ghosts. Vampire ghosts. Kos rolled away from the gargoyle and wavered to his feet.

“By the authority of the Boros L—” a set of fangs sank into Kos’s spectral thigh, and he screamed. With an authoritative downward chop, he brought his bam-stick crashing into the forehead of the offender. Limping sideways, Kos pointed his weapon at the half-dozen or so Dimir that had encircled him during the fray. Gargoyle, vampires, ghosts, shapeshifter, and some kind of elemental blob that looked like oil and seafoam.

“You’re all under arrest.” Kos tapped the Boros pin on his lapel. “For the the murder of agents of the Legion.”

The gang around him laughed, their mirth twisted by their existence in Agyrem, the sounds manifesting as weird spurts of hisses and growls and keening notes.

“No way, old man,” the gargoyle said. Kos shrugged and backed into the corner. He lowered his bam-stick.

“Well, if you’re not under arrest,” Kos said, looking at all of his attackers in turn. “I guess you’re free to go…”

The gang looked at each other in confusion.

“...to hell,” Kos finished, as a screaming spectral blade sliced the gargoyle’s head from its shoulders.

Within seconds, the Dimir were dispatched. The fleshies were dead, the geists were inert, the vampires were impaled on wooden daggers, and the gargoyle was a pile of rubble.

“I could use a drink,” Rhoka said matter-of-factly.

“I know a great place.” Kos led them out of the belltower.

Szadek had turned Kos’s last partner against him. Her twisted form had broken into his bedroom, wailing to wake the undead and nearly eviscerating him. Kos had used a broken bottle shard to carve the lich’s heart-source from its chest as she tried to strangle him. Afterwards, Kos had dry-heaved out his window for half an hour. Wenslauv had been an amazing skyjek. For decades she’d served, selflessly, for the city and the legion. After death, she’d enthusiastically signed on for more. Szadek, damn his ass to hell, had somehow found a way to corrupt even Wenslauv’s staunch spirit.

Kos put his hand on Rhoka’s shoulder, his new partner looking up in surprise at the gesture.

...to be continued in Chapter 2: Night in My Veins