Week #2: Jace Beleren | In honor of the Planeswalker theme weeks celebrating the release of Magic Origins, I'm posting the Jace sections of Retribution in Ravnica, my multi-chapter fanfic, here as a separate excerpt. If you'd like to read more of either the Argentum or Ravnica arcs, just go to the Fiction tab of my blog. In the meantime, enjoy some Jacepact. 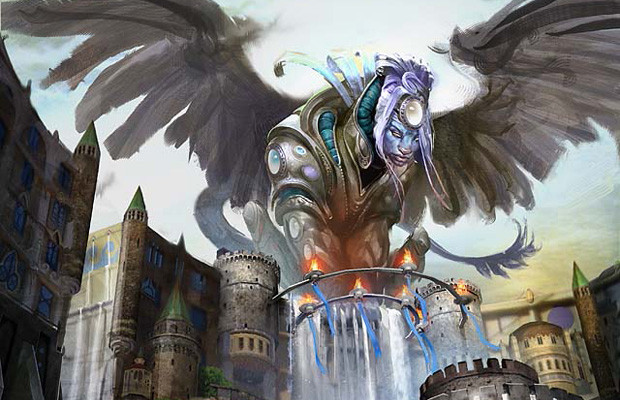 “You look like hell,” the sphinx purred. Jace threw up his hands in resignation and stumbled forward into Isperia’s chamber. The Guildmaster of the Azorius Senate looked down her feline nose at him and sniffed. “And you didn’t bathe,” she chided.
“Didn’t sleep well,” Jace mumbled, sitting down heavily atop one of the sphinx’s massive paws. Isperia curved her neck, looking down at the mage fondly, and gave him a gigantic, wet lick across the head with her rough tongue.
“Ouch!” Jace shrieked, jumping up and clutching his hair dazedly. Isperia chuckled.
“Sorry. Couldn’t help myself. You just look so tasty and adorable when you’re downtrodden.”
“What if I licked you everytime I—oh, nevermind.” Jace slumped to the floor. Isperia was laughing, the sensual rolling sound like wind across a balmy isle in the sea. Jace chuckled, too. He was ridiculous this morning, and he knew it.
“Going out to Utvara,” he said, scrubbing his face with his hand. “Want to come with m—”
“No,” said Isperia. “But I will.” The sphinx lifted her tail and flicked it across a giant gong. The metallic boom reverberated throughout New Prahv and Jace winced. A few moments later a spirit appeared, carrying a gleaming silver coffee service. Jace took a cup gratefully. “Syndicate’s best,” Isperia said, with a wink. “I know how you like it dark.”
“What’s that supposed to mean?” Jace pouted, slurping coffee like it was going out of style.
“Sphinxes don’t even know what we mean ourselves, most of the time.” Isperia bent her great head down and ate the entire sugar bowl._______________ 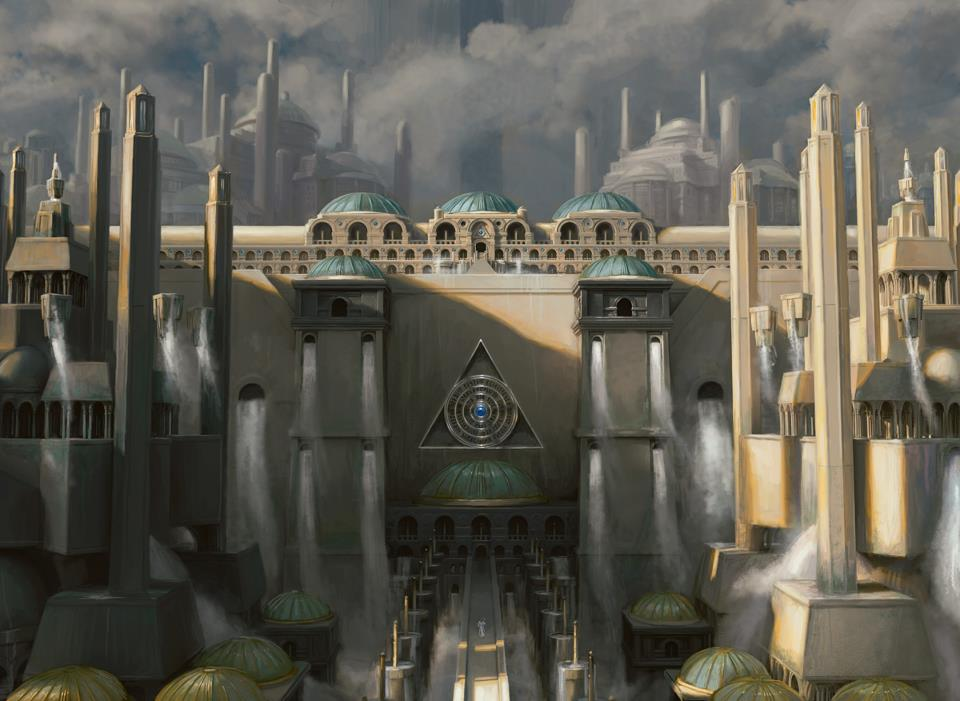 Lavinia, formerly of the Tenth, now right-hand to the Living Guildpact, bludgeoned the knocker once more.
“Jace,” she called out. “JACE.” Lavinia’s cast a blazing blue-eyed glare at the door. The Azorius Prime Arrester gave it up and kicked the door open.
“What?” Jace snapped, looking up with mussed dark hair hanging into his strained dark-circled eyes.
“Lunch is served, Living Guildpact, sir,” Lavinia announced formally.
A parade of homunculi and vedalken and specters filed in with treats on silver platters.
“I’m not hungry,” Jace said, returning his attention to the document at his desk.
“Yes, you are,” Lavinia retorted, drawing her sword. She strode toward Jace’s dais.
“I have to finish this. I promised the Sovereign—” Jace wrote doggedly, his brow deeply creased as he concentrated on the legal terminology and proper wording.
“If you don’t take a bite of that meat pastry right now, I’m going to cut off that vedalken’s hand.” Lavinia raised her sword. The vedalken in question paled and shoved a meat pastry toward Jace’s face.
“Lavinia, this is truly unbecoming for the Guildpa—”
“Three… two…” the arrester’s eyes glittered.
Jace bit the pastry. Delicious flavors of lamb and barley blossomed in his mouth, a comforting warmth spread from his tongue to his throat. The mind-mage chewed reverently, closing his eyes.
“Leave all that food, just put it down on his desk. And leave,” Lavinia ordered. The servers did as they were told.
“You shouldn’t be so harsh with them,” Jace said, taking another bite of the meat pie.
“You shouldn’t be so concerned with how I address the help when you can’t even remember to nourish yourself properly.” Lavinia stood next to the desk, watching with the gaze of a hawk, making sure Jace ate some of everything.
“I’ve got to finish this document…”
“Sign it, it’s done. You’re done.”
“Lavinia, really, you can’t talk to me that way in front of—”
“Until my master demonstrates he can take care of himself, I’ll talk to him however I please,” she replied, snapping the scroll shut after Jace signed, before the ink had even dried.
“Please take that to the Sovereign, Lady M—”
“Yes, yes, I know. The Gateless lady. The one with the perfume and the pale silks and the Schism’s blessing for tits.”
“Lavinia.”
“Good afternoon, Guildpact.” The arrester bowed deeply and humbly, and left.
Jace was too tired to do anything else about Lavinia’s purposeful insubordinance. He even laughed to himself. He was well aware that Lavinia would lay down her life to defend him. And, truthfully, he’d earned much of her tirade and criticisms. If it made her feel better to be so heavy-handed with him, he’d gladly play the hapless boss. But the document was finished, the guildless in Utvara would be protected…
Small victories, Jace thought. Is that what I am, now? A collection of small victories.
The planeswalker told himself it was better than being a collection of failures, or a pawn in someone else’s game, or a slave to a madman. There was honor in being slave to the city; a servant of the greater good. Of the people. Jace knew this intellectually, and tried to make himself fit the austerity of his desk chair and the empty angles of the grand governmental room.
The Guildpact Ball was approaching. New Prahv would play host to the most important and influential leaders from all across Ravnica. Jace would have the opportunity to meet them in person, touch their minds, and get a feel for the state of affairs on the plane. Lady Muirrh would certainly be there. There were many preparations to oversee. Jace picked up a note marked “URGENT” off the top of the stack of notes on his desk.
Guildpact, please indicate with as much haste as you can afford, at your earliest convenience, of course, which punch glasses you would like to use at the Guildpact Ball.
Respectfully,Wiron, Master of Events, New Prahv

Jace picked up the next message, marked “CLASSIFIED”

Guildpact, the south latrine has been determined to be out-of-order indefinitely by the Izzet plumbers we had out today. We are afraid that four functioning latrines might be insufficient for the attendance at the Ball. Humbly request your opinion on whether to order in a rental latrine, attempt to repair the old one using mercenary guildless plumbers, or run with only four for the event. There is also the option of calling in Golgari specialists… but we were unsure of whether this would be politically correct due to the recent attacks.

The Golgari attacks. Would Vraska make another attempt on his life again anytime soon? Reaching for his glass of water as he focused his renowned mental energies on the problem of toilet capacity per guest, Jace caught himself hoping that she would.
______________
Posted by MJ at 10:12 AM