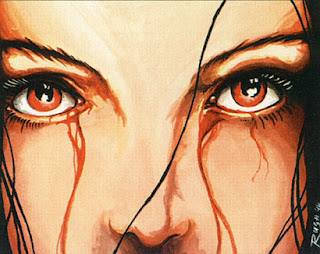 What seemed like years later, a thickset intruder entered the hut. I concluded that the other two had both died in the fight over me and this third claimant to power had ascended. This one had the joyless, blocky walk of a Pillarfield Ox. His muscular stride carried him far too efficiently to my dark corner, and he put his freezing palms under my armpits and hauled me outside. Pushing me to a kneeling position before him, he took out a knife. 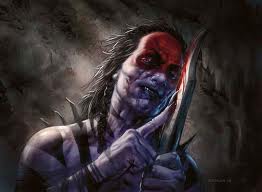 His only acknowledgment of my sentience was a quick nod. A flick of the eyes. Then he stabbed me between my shoulder and my neck. I can’t remember if I screamed.

He shoved me face down into the earth in front of him and straddled me from behind. I felt his rough leather breeches chafe my hips, pinning me down. He leaned to one side and put his mouth to my flesh. Then he drank me. 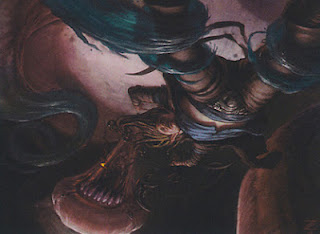 The nausea was debilitating. The earth undulated beneath me and reverberated deep within my bones. Then I was floating above myself, seeing a fragile-looking, fair-skinned girl pinned beneath a muscular body festooned with bonelike hooks at the shoulders and elbows. My assailant had crimson streaks in his long hair and his body arched and relaxed rhythmically with his drinking. I marveled at how small I was and how menacing was he. I had always been pale—my mother attributing it to more Kor blood than human in our line—but now I was ghastly white.

“We were better off before,” I heard a Vampire say in passing. “Norwion had his deviant interest in young humans, but Worgon is a glutton beyond redemption.” Its comrade chuckled.

“Look. He didn’t even bite her. He had to have it gushing from a knife wound.” More laughter, stifled but derisive, as their footsteps fell quickly away. 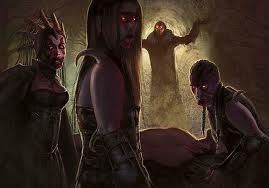 Worgon didn’t seem to notice. The sloppy manner and vehemence with which he was consuming my plasma confirmed the words of his peers. I was losing consciousness. Slivers of hope and plans for escape slipped my mind like the tadpoles that eluded my fingers when I was very, very young playing in the river.

His weight and strength grew as I weakened. I felt my breasts press into the rough earth and dreamt that I heard Aklua laugh. How could you leave without me, I chided him, winking. Just rest now, Lisra. I wanted to follow him. Aklua…? 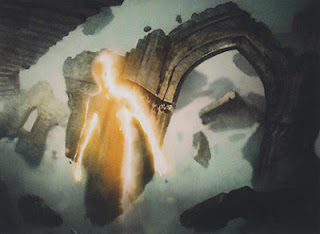 Laughter. Very deep and rich, richer than Aklua’s that was like coffee beans falling in a Roil storm. Laughter like black silk on black velvet. Laughter like dancing shadows in a void. Laughter that filled me with a visceral desire to open my eyes. I did, and saw dirt stained dark with my own blood.

Worgon’s leg was braced between my thighs and I felt him tense and lift his head. The moment his repulsive sucking stopped, the pain crashed into me. It was a red wave of jellyfish at high tide, salt and lightning drowning me. To my shame, I heard myself whimper. 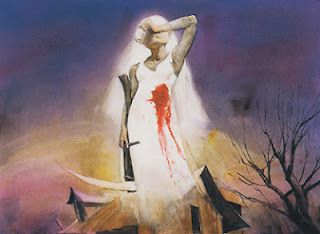 “Worgon,” said the rich voice, “Wipe your face.” I felt Worgon switch to a crouching stance above me. Something soft landed on the ground next to my shoulder. An intense curiosity overcame the chill of impending death and I opened one eye. The object that had fallen to earth was an ornate white lace handkerchief.

“You!” Worgon said in a voice wet with trembling rage. “We are not beholden to you, anymore! You swore!” He sounded afraid.

“Not beholden. But you are holding something that I desire, Worgon.” The deep-voiced stranger chuckled at his own joke. I remember thinking that the joke wasn’t particularly funny. 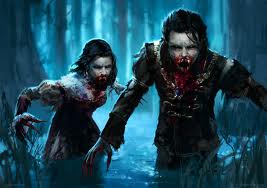 “We will slay you too, Betrayer,” Worgon declared, and let out a tribal whoop. Dark shapes emerged at the edges of the confrontation. I heard a few answering whoops. There were many, many Vampires.

“No,” the stranger said. He laughed. It lingered on the air. The shadows in the jungle lengthened and drew towards his voice. I could not raise my head to see him, but I felt the tremor of some kind of awful power as it fled the trees and the earth in favor of the stranger. 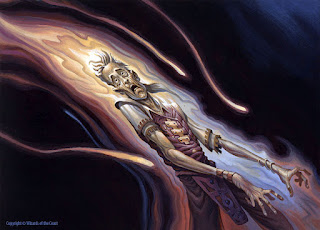 Worgon stumbled, his knee hitting me sharply in the small of my back. I had no idea what happened, as he clearly hadn’t been struck a blow. Yet, I felt his weakness in the uncertainty of his stance as he once again took a standing position over me.

“Come now, surely we can all be friends,” the stranger said. I felt joy at the mockery in his voice.

Worgon shrieked incoherently. From the corner of my eye I saw dozens of dark Vampire shapes as they flung themselves from the perimeter toward the stranger. There was a chuckle, and then a quick, sharp, guttural boom of words. The air sizzled and I smelled blood, then smoke on the wind. Worgon’s dagger dropped near my left hand. Without thinking, I snatched it and through sheer force of will rolled onto my back, praying to catch him in another misstep and stab him someplace vital. 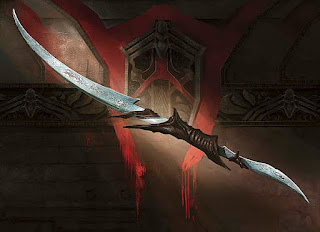 There was only the night sky above me. The cool air of the jungle caressed my skin. I clutched the dagger in my hand, straining to hear the sound of Vampires approaching.

“Don’t bother,” said the stranger, his rich voice nearly right on top of me. He muttered some arcane words. My body went numb. The pain was gone, but I realized I could move naught but my eyes. My fear choked me. A tall, darkly clad figure walked around me and to the doorway of my family’s home.

His hands were covered in blood—thickly, as though he had slain many enemies with just his palms and fingers. I marveled at this, knowing I’d heard no hand-to-hand combat in the battle just now. He stopped in front of our wash basin that stood to the right of the now-gaping doorway, and paused. I saw him bow his head, and beneath his black leather jerkin and velvet cloak I thought a tremble crossed his broad shoulders. But then the moon emerged from behind a wisp of cloud and the light danced on his white hair and I couldn’t be sure what I’d seen. 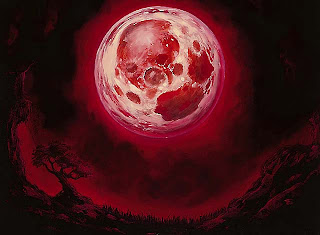 He washed his hands meticulously in the basin, taking his time, and dried them on another white handkerchief that he seemed to pull from nowhere. He regarded the fabric for a moment, then tossed it on the ground with disgust. He smoothed his long white hair down over his ears. Then he turned towards me. 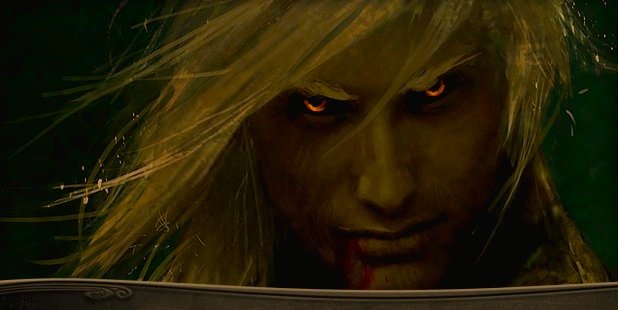