At the end of the world, there was only a goblin. He was strapped, against his will, to a device of his own making. A device that connected him to the rest of the world, in most intimate fashion.

When the Green Sun rose, when the power cleansed the plane again…
Slobad was no longer just a goblin. He was a god.
“Try it before you give it up,” Karn had said.
Slobad had experimented, floating up and flying around, weightless, as if in a dream. But it didn’t compare to the other feeling…
“No, bring her back!” he had shouted. Shouted. Why did I shout? Why was I so afraid?
“Are you sure?” Karn had said.
“YES.”
So the power had flowed out from his ascended body, and back into all the rest of Mirrodin. Slobad had never felt so deflated. But when he lifted his limp head, Glissa had been standing there, over him, smiling. His friend was alright.
“You’re the stupidest goblin I’ve ever met.”
“Not saying much, are you, crazy elf!”
From there, it was more of the same. They tried to do good things, build things, but everything failed and things turned dark. Glissa became more angry, more afraid. Slobad found it harder and harder and then, impossible, to make her laugh. The world wanted more and more mana. The ground turned hotter, and the skies more brittle. Slobad often wondered if he’d made the wrong decision.
____________ 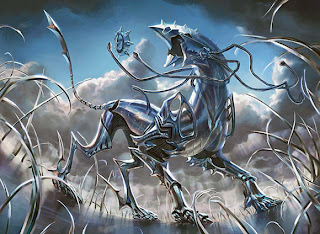 “Elesh Norn is the only power on this plane with the capabilities to do what you’re asking,” Jor-el said as he twitched the reins on his mount.


“But it sounds like that’s really far away,” Liliana complained, moving her Chrome Steed up to match his.

“I don’t see any other way,” Jor-el said, his tone ending the conversation. Venser watched as Liliana reined her steed back, dropping away form Jor-el. Her expression was cold.


“Prrrrrrrrrrrroblemsssss?” Venser whooshed as he neared Liliana, completely out of control. His mount was doing whatever it wanted, his zombie hands unable to give it the nuanced signals it desired. Venser’s Chrome Steed tossed its head and sidestepped, nearly throwing its undead rider to the ground. Venser grunted and smacked the steed with his disembodied arm.


“Ugh,” Liliana said, rubbing her temples with one hand.


The sun rose, burning everything beneath it. 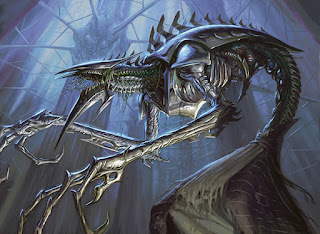 Karn looked through tears upon his son.
Memnarch had converted himself to an insectoid shape. The Praetor was cold and calculating, more machine than man. Karn had not intended for this to be his destiny. He had hoped the guardian of Argentum would find peace in tending a perfect metal world. Instead, his progeny had lost his mind, had done violence unspeakable, had found no peace at all. The silver golem bowed his head.
And am I much different? What I set out to do and what I did are two entirely different stories.
“Memnarch?” Karn said. 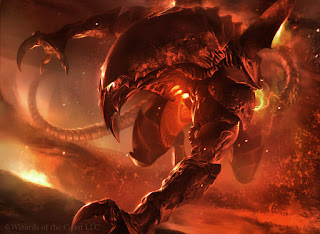 The fires danced in her hair. The light caressed her skin, and the shadows haunted her steps and her eyes and made him hurt.
Hurt? Why should he hurt?
But he did.
Urabrask stood unmoving next to a pillar in a the Furnace Level. He strove to make his breathing as even and quiet as possible.
Completely out of reach, the emerald-and opal -and red jasper human bent to retrieve something from the rocky floor.
Urabrask blew smoke out of both nostrils, both ears, and all twelve valves in his body. 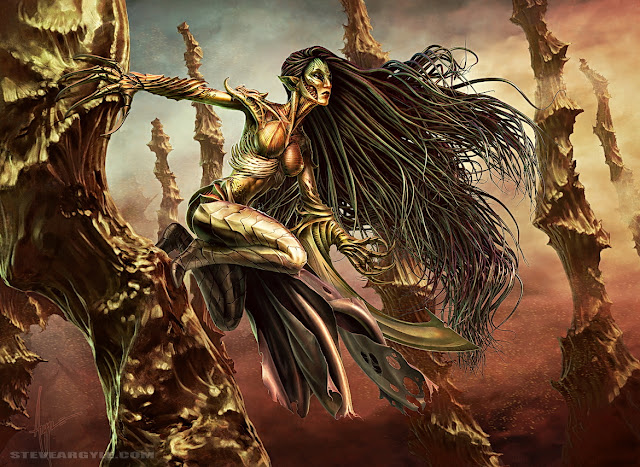 “It could be a trick.”
“It could.”
Vorinclex and Glissa rode steadily through the rusting Tangle. A light acidic rain fell weakly on their shoulders as their mounts and those of their retinue broke trail towards the white cliffs.
“Why should she want to meet here?”
“It is fairly neutral.”
“I don’t like it,” Glissa grimaced and set her jaw. Vorinclex knew this was a sign of her extreme anger.
“Come, it will be fine,” he said. The words were soft and strange, and Glissa looked at him immediately with a suspicious frown.
“Ahem,” said Vorniclex. “Captain, you may be relieved of your duties if you can’t see this through. I will lead our Tangle troops to Elesh’s stronghold myself.”
“Sir,” said Glissa, “You know that is not necessary.”
“Good,” Vorinclex said, forcing a harshness he did not feel into his response.
Glissa, however, seemed at ease with his gruffness, and rode forward contentedly. Vorinclex delighted himself for half a minute watching the rain drip from her corded hair, and noted with joy how the wild birds seemed to flit from branch to branch, following his Captain’s advance. Then Glissa glanced back and Vorinclex pasted a dour frown onto his face. Glaring at her like a Praetor should.
She turned around, leading the party through a nasty clumping of bloodsucking vines, and thus didn’t notice Vorinclex humming and tapping his fingers rhythmically on his mount. 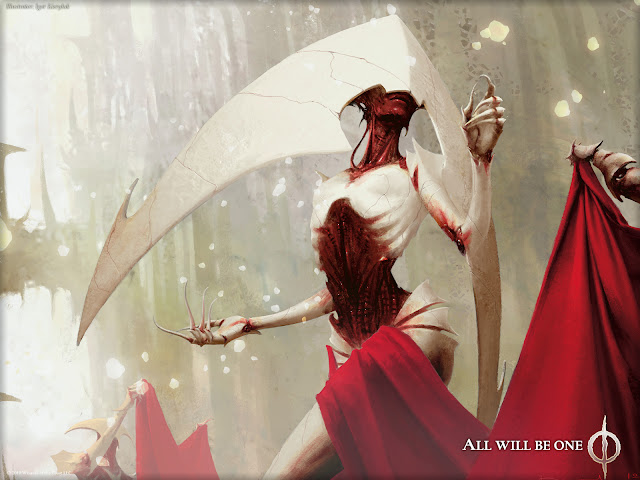 The plaza was whitish but tinged with pink, and Liliana smelled the distinct scent of epidermal decay.
The blue sun hung low in the sky above the organic, artificial promenade and gave everything an even more charming greenish cast.
“Prrrfct for ahhhhoneymoooon,” Venser whooshed.
“Shut up,” Liliana snapped, tensing as she saw a svelte figure appear on the horizon.
This is all to get you back to functioning, flesh-and-blood form, may I remind you… Liliana mentally gritted at her zombie minion.
How selfless of you Venser’s blue eye flared back at her.
“Liliana? Elesh Norn welcomes us,” Jor-el  smiled grimly back at them, and Venser restrained an urge to throw his detached arm right at his face.
What in Urborg do you see in that guy? Venser thwacked the razor grass with his arm as they rode closer and closer to the pale figure ahead.
Do you know why he doesn’t look like the rest? He thinks the vanity of the Auriok condemned them to doom; contributed to their loss at the hands of the Phyrexians. So he renounced their practices. That’s why his hair is brown instead of blond. Liliana regarded Venser with a dramatically arched eyebrow.
So, you like him because he feigns more modesty than the rest of his golden posse? Venser put one skeletal hand over what would have been his breastacular region, had he been whole.
He gave up his entire ingrained belief system in order to bring his people a new way of life. In order to give them a future. To bring them hope. 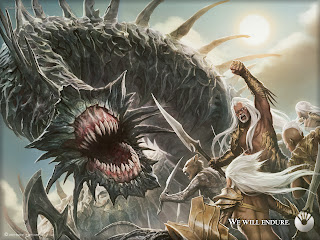 I’m pretty sure he just took the wealth he used to spend on hair treatments and skin bronzer and reallocated those funds. Namely, funneling them into wine and 3,000-thread-count sheets.
To Venser’s shock, Liliana laughed.
How in the helvault does a guy like you know about thread counts? she smirked. He shrugged his one good shoulder.
I couldn’t sleep one night. Stayed up and counted them.
Wait, what--while we were sleeping under them? Liliana’s smirk changed to a dark glare. Venser’s silent stare was guilty. Were you there the whole night?!
It’s not like you’ve given me a lot of choices to pass the time in this damn place.
Liliana’s face twisted in indignant disgust. I should have known better than to trust you to be off my radar even for a few hours--
The guy snores like a beast. Did you realize that? About two minutes after you guys pass out, he starts up and it’s like listening to a two hundred year old baloth trying to blow snot bubbles out of its open mouth--I mean, you look amazing, of course, My Lady, but between your farting and his viscous blubbering, it kind of ruins the vista of your repose...
Enough. Liliana’s eyes were dangerously dark. Venser noticed she was grinding her teeth, which he had thought she only did in her sleep...
You know, the great thing is I found out that I can detach my head in a certain way that allows me to screw it back on. So, when I’m lying under your bed, I can unscrew my head, hold it in my good hand and lift it out from under the mattress, and if I tilt it up and to the left I can get this truly stunning angle on your a--
“ENOUGH!” Liliana exploded, raising her clenched fist as it swirled with black mana. Jor and the rest of the Auriok escort turned to look at her, alarmed. Venser watched in fascination as an uncharacteristic flush crept from her clavicle up her neck. He was surprised by the stab of pleasure he suddenly felt in his gut--er, where his guts would be. Liliana shrank contritely beneath Jor's gaze and composed herself, lowering her hand. And batting her eyes apologetically. Jor nodded sternly and turned back to his vigil of greeting the Praetor.

When Liliana next caught Venser in her sidelong glance, it was icy. He looked away.
They all resumed watching Elesh Norn and entourage approach.
Really, how’s a guy supposed to sleep through that? Venser mused hesitantly a moment later.
I like him because he’s a success at what he does Liliana's words seemed to come from a distant place as she rode forward towards Jor-el. The mystic, formerly Jor Kadeen before he had so "humbly" renounced his glorious ways, lifted his hand towards Liliana with a quiet smile. Her answering smile was serene, her eyes calm and dark. She raised her hand to the Auriok lord with supreme grace and allowed his fingers to touch her palm. Together, they turned to face Elesh Norn.


You have no idea why we’re really here, do you, dear Spencer, naive fool.


Liliana’s last words, before she severed the connection, echoed in frigid waves at the edges of Venser’s mind. He shuddered as her voice faded away, the statement chilling him...that is, it would have, if he had any hope left. 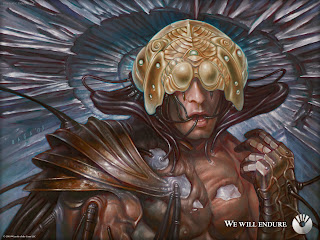 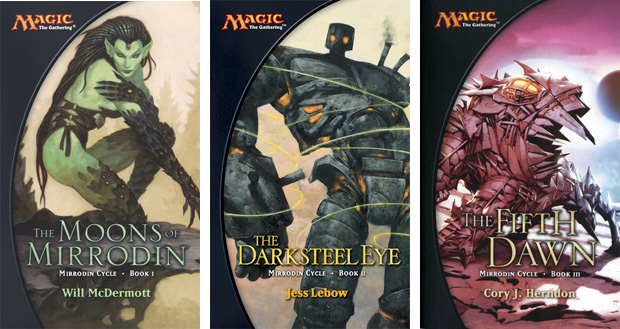