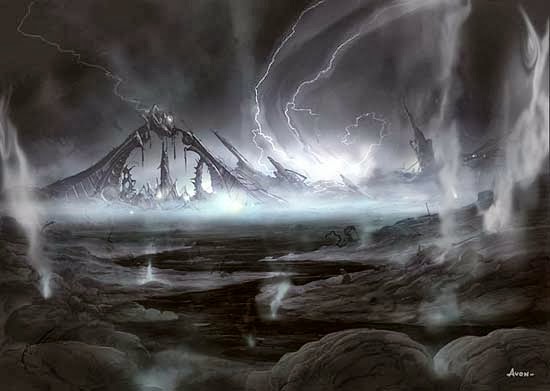 Venser regarded his palm with interest.
It’s just a hand.
His subconscious laughter echoed and clanged maniacally through his skull. He pressed his palm against his face.
I have a nose.
The pain rose from Venser’s toes to his throat, cutting off his air, his rational thought processes. Suddenly he was a boy in the swamps again, a foolish boy who’d leapt from a skeletal tree onto a peated hummock too far below. His ankle had snapped, bone shards bursting through the pale skin like grass through soil. I lay there, screaming. Until he found me. Venser’s second memory of his father, out of the two he possessed...The unkempt man had lifted him in sinewy, strong arms.
“Quiet. Artificers don’t squeal like animals at slaughter. We are above pain, for we can outthink it. It's just an ankle.” His father had laid him on a stone table. I burned with shame. The shame was worse than the physical pain. My father put his hands on me. I would never cry out like that again...Venser’s bones had knit beneath the artificer’s touch. And then I slept. And I then I woke, and father was gone.
His father had never come back. But why should he? What brilliance in artifice was it that allowed him to heal with a touch? To reverse extreme wounds? What powerful lore had his studies garnered him? If my father could understand machines, but could make flesh do his bidding—What...what…
What am I?
“Nothing,” Venser said aloud to the dark. Gods of Urborg...
He vomited, over and over again, his heart exploding a rhythm in his ears and his stomach contracting, gnawing itself dry until he prayed for it to stop.
And he heard another voice in his head.
Ah, Fencer. And all this time I thought you didn’t believe in gods.
____________ 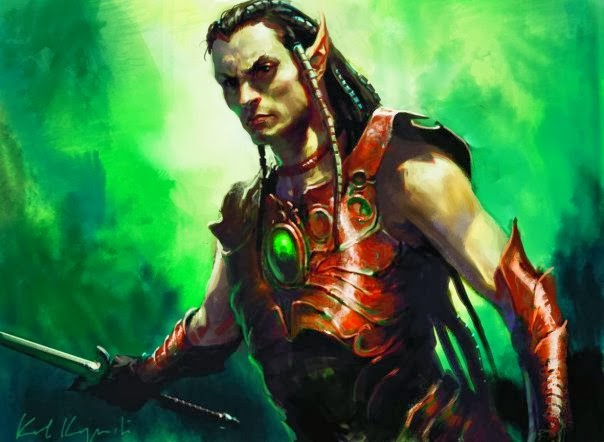 Ezuri stood stoically outside the tree in which they’d housed their unwelcome guests. He was, after all, an Elf, and obligated to show as little emotion as possible. His long ears twitched in the burning rain that drizzled down from putrescent, puce-colored clouds. It was a lackadaisical, lazy rain that fell as if it just didn’t have anything better to do. Ezuri rolled his eyes when he thought no one was looking. He felt a hand on his shoulder.
“Infuriating, isn’t it?” she said, violet eyes narrowed in understanding. Her lips were moist and the color of lotus-pods. The lips curved upward in empathy.
“It is,” Ezuri said without really wanting to. The mysterious woman nodded slowly, staring into his eyes.
“We’ve shown up here, in this fractured sanctuary you’ve worked very hard to build up from nothing, like helpless, mewling kits determined to suck resources from you that you cannot afford to give. We’ve done nothing but cause you trouble, and on top of that, we’ve brought your enemies to your home. You have every reason to be angry with us. With them,” she said, gesturing towards the discordant clumps of Auriok camped out in the Tangle.
“With me,” she tilted her face up to him. Ezuri watched uneasily as Vorinclex and Glissa, his hated enemies, emerged from the large command tent in the center of the clearing. A twenty-foot berth stood around their tent that no one would tread on, making the Praetor and his captain an island of their own.
“She has no idea,” the dark woman said, her attention drawn to their Phyrexian “allies” as well.
“Of what?” Ezuri scoffed.
“That he loves her,” Liliana sighed. Ezuri couldn’t help himself; he physically recoiled at the thought, then he laughed out loud.
“That cannot be. Vorinclex is a simple-minded monster,” Ezuri said matter-of-factly. Liliana trailed her hand down his back and nodded in apparent agreement.
“But then, aren’t we all?” she murmured. Ezuri turned his head to hear her better and found his nose much, much too close to her dark hair that smelled of gilded lotus, smoke, and spice. The rain dripped down onto her temple, and he raised his hand to brush the stream of liquid away.
A scream ripped from the darkness within the tree-hall behind them.
Ezuri started and jerked his hand, poking Liliana in the eye.
“Augh! Griseldamned, that hurt,” she jerked away, shoving him in the arm. “Bolas’s balls, watch where you put that thing,” she spat, glaring at him before she turned toward the screams emanating from the humid shadows of the arching trunk behind them.
__________ 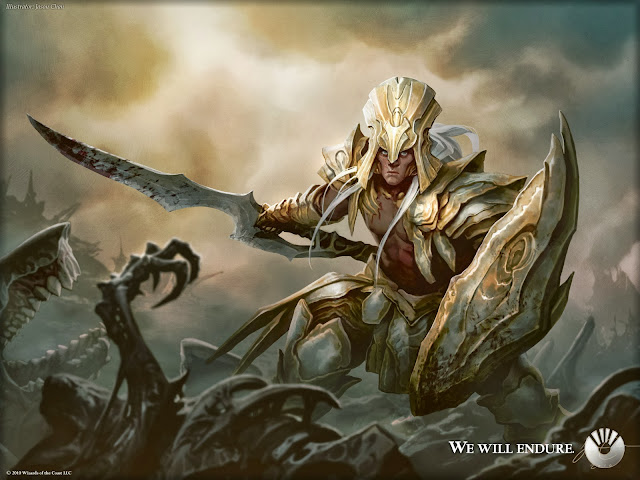 Melira felt like she’d aged ten years in less than a week.
Her beloved refugee camp was filled with Phyrexians. And, she had to entertain a depressed golem and a goblin’s hand for hours upon hours--at least until Liliana got back.
The Phyrexian horde had clickety-clacked and scurried down the sloped floor of the cavern, their hisses and chirps blending into a symphony of ghostlike murmurings.
Melira stood her ground, in front of the Darksteel shelters built into the walls of the southeastern side of the Furnace Level. Auriok warriors surrounded her, their light hair gleaming and their steel shining, ready for death.
“You will leave us in peace!” Melira said, or something to that effect.
“I can’t quite remember,” she recalled to herself, embarrassed.
The horde had parted and from its center walked a huge metal man, his skin a shade of silver that she had never seen. Light seemed to be drawn to him and emanate from within him at the same time.
“Mem-Memnarch?” Melira stuttered, shaking but refusing to back away.
“No. Karn.”
“And Slobad!” a goblin’s hand jumped up from the golem’s shoulder and perched itself on his head. “We stay here until the dark lady get back. That what Slobad knows.”
Melira moved her rook. She hated games, but chess was the only thing that seemed to calm the golem down. Given too much free time, he’d pace in circles until the floor wore in and he’d start grabbing at shadows, threatening bystanders and yelling at people that didn’t exist, using arcane words like urza. Melira had discovered, by accident, that the metal man could be placated if presented with a mental challenge, such as chess. It was the only game she knew, having been taught by the Trolls, who undoubtedly imported it from some other world.
Unfortunately for Melira, Slobad (who’d appointed himself Karn’s official coach) was uncannily good at chess.
“Checkmate, green-red girl! Hahahaha, Slobad--uh, we mean Karn--win. Again.”
______________ 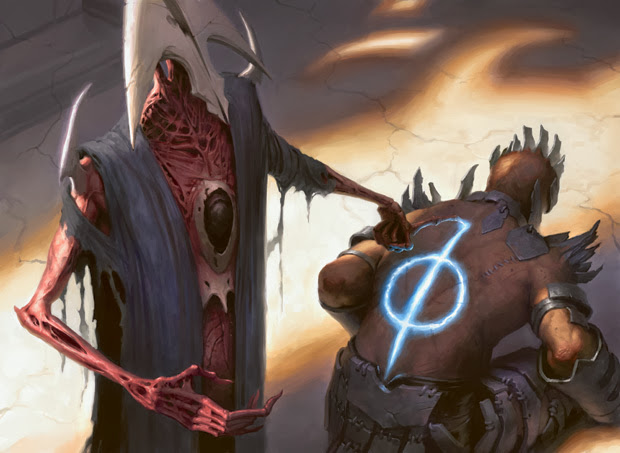 The sun had risen early, touching the scene eagerly with wan fingers.
“Bring the offering forward,” Elesh Norn had ordered with throaty significance.
Phyrexian minions obeyed with grotesque alacrity.
Jor-el did not look good.
“What?!” whoosed Venser, his zombie parts looking as if they’d fall clattering to the white marble tiling at any moment. His good eye flared blue and his head jerked back and forth--from the dragging of the Auriok mystic’s body across the palisade to Liliana’s violet eyes, and back again. And so forth.
“What?” Liliana said.
“You...doooooooooooooooon’t carrrrrre?” Venser breathed, with effort. The Phyrexians were nailing the Auriok to a pointed construct in the middle of the plaza. Jor-el sighed in pain, the sound carrying over the stale wind. It was a soft sigh, not rebellious or hopeful. Just tired.
“The ritual shall commence,” Elesh Norn whispered, and somehow her voice carried over the desolate scene. The Phyrexians advanced toward Venser.
“Wait--” he managed to gush.
“What?” Liliana said.
And then, the dark liquid rose up before his eyes, and the pain came, and his nightmare began.
___________________ 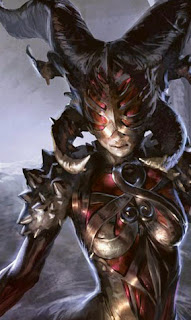 Sheoldred couldn’t stop the twitching in her limbs.
She tried clasping her pincers, abstaining from food, eating too much food, counting to infinite numbers, meditating on abstract things, and exercising.
Nothing worked, and the shakiness continued.
Even her voice was affected. Many times when she tried to address her troops, her words would tremble and falter. When she attempted to negotiate with the golem and the red-haired girl, she stuttered uncontrollably.
“Chess?” said the goblin hand one day.
Sheoldred had nothing else to do.
______________________________ 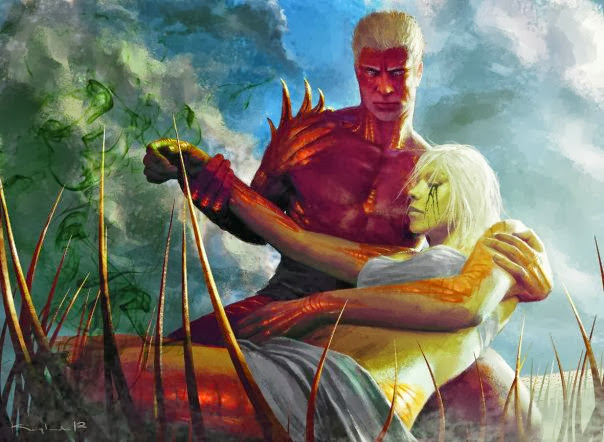 Liliana lay with open eyes, staring into the dark.
“Beautiful. Like the twisting, jagged edges of a fine but terrifying dream that flies before the onslaught of your consciousness,” Jor-el said, curling his fingers through the ends of her hair.
Jor-el had said.
“There is no God left on this world. He must have left us long ago. For how could a just God stand aside and let the Phyrexians happen?”
There is no God, Liliana thought.
“It must be a product of science, of natural motion,” Jor said, running his fingers down her neck and hesitating above the silk neckline of her shift.
It must be because you have no magic powerful enough to stop them, Liliana had thought.
“Fate challenges all men with things he cannot control,” Liliana had said. Jor-el had smiled, that rare, dimpled smile that made the corners of his eyes relax into a charming downward slant. His expression was boyish, hopeful...
Venser’s screams shattered the inky quiet within their Tangle tent. Liliana bit her lip and threw the blankets from her body--remembering the carmine glow of Jor’s eyes in the dark. She stood alone in the shadows. Venser screamed again, this time the screams dissolving into wet sobs in the blackness. Pain, he must be in a lot of pain...
“I’ll kill him,” Liliana muttered to herself. I need my sleep!
No, you don’t, and no, you won’t intoned Nicol Bolas, sounding bored within her consciousness.
Good thing you’re a dragon, and not a man Liliana thought in reply.
Is that a threat? Nicol Bolas chuckled.
___________________