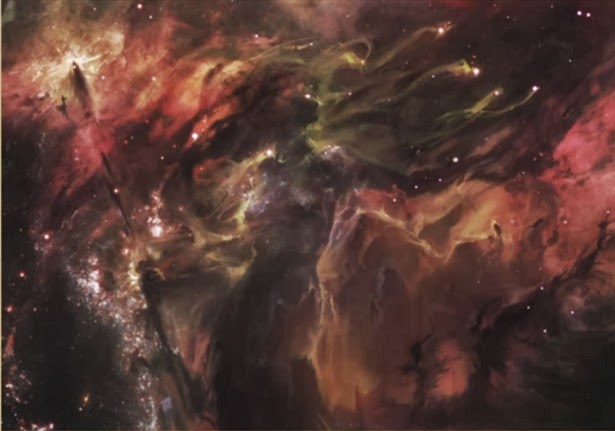 “So what you’re saying is... there're a lot of other people like us.”

“Well. In the broadest of terms. There’s no one quite like me, of course,” Liliana smirked. Venser rolled his eyes.

“How did you survive this long being so predictable?” he gave her the slightest of elbows-to-the-ribs as they maneuvered the starry walkway above Theros, their path a narrow ribbon of etherium that twisted treacherously through the Aether.

“I just know how to surround myself with the right tools,” Liliana returned, grabbing his ass. Venser yelped and lost his balance, teetering on the edge of the dark metallic path for a terrifying moment. The bright hues and uneven development of Theros swam and shuddered beneath him. Then he was back on solid footing. Liliana had a firm hold on his upper arm, her nails digging deep into his flesh.

“Don’t leave me yet, Vense,” she laughed.
Venser turned away from her and blushed out into the void of the multiverse. Liliana’s grip relaxed, the pain from her grasp subsiding to a dull ache. She had no need to steady him now, but her hand didn’t leave his arm. Her fingers slid down to the crook of his elbow and stayed there. They walked in silence.

“Have you run into Gideon yet?” she finally said, just as they passed out of the sparkling Theran lights and into a miasma striated with murky brown auroras.

“Lucky you,” Liliana snorted. Venser glanced sideways at her. Her eyes were dark pools, undreadable and, at the moment, still and reflective.

“No, just muscle,” she chuckled.

“Sounds like you, eh—knew him.” Venser braced himself for a black mana-laced outburst. To his surprise, Liliana’s fingers just tightened around his arm, almost imperceptibly.

“Gideon. He’s just one of those types. Forces you to make the move. Always has to be absolved of any investment in the situation.”

“Got it,” Venser said, not sure that he did at all.

“Look,” Liliana said. “My home away from home.” A huge plane opened up below them. Grids and circular developments covered the entire expanse, with no open spaces he could discern at this distance. Flickering lights dotted the cityscape and, through the veil of the Aether, looked like millions of dancing foxfires. It had to be the most populated plane he’d ever seen.

“Welcome, you little liar, to Ravnica. My humble abode.”

“Smells—uh, lovely, too.” Venser gasped as a streamer of luminescent brown-and-puce passed too close to his face.

“You get used to it,” said Liliana.

To be continued…
RETRIBUTION IN RAVNICA
March 2014